The Valley’s environmental activists are continuing their rich history of civil disobedience by taking a stand at the Otis State Forest.

Forty years ago the activists were members of the Clamshell Alliance, many from western Massachusetts, trying to block construction of a nuclear power plant in Seabrook, New Hampshire. Today’s activists are members of the Sugar Shack Alliance, protesting the expansion of natural gas pipelines. Like their counterparts of four decades ago, pipeline protesters favor energy options they contend are less expensive, safer and friendlier for the environment.

Sugar Shack demonstrators argue that their civil disobedience, resulting in some arrests, is a principled act calling attention to a misguided energy policy — just as their Clamshell counterparts did in the 1970s.

A total of 24 people, most from the Valley, were arrested during the first week in May at the Otis State Forest, where the Tennessee Gas Pipeline Co. plans four miles of underground pipe as part of its Connecticut Expansion project. The protesters blocked access roads for the tree-cutting needed to widen the company’s right-of-way through the forest.

A Berkshire Superior Court judge last year granted Tennessee Gas a permanent six-acre easement for its pipeline through the state forest on land it acquired by eminent domain under the federal Natural Gas Act. Opponents contend that the conservation land should be protected by Article 97 of the state Constitution.

Among those arrested May 2 was Ron Coler, a member of the Ashfield Select Board who explained his motivation: “Here at the municipal level of governance, we can wait no longer and, simply stated, it is time to cross the line. Because of the lack of serious commitment and much-needed leadership to the real threat of global warming, I feel compelled to answer that call myself, alongside my Sugar Shack Alliance family, and engage in this grassroots, nonviolent, direct action.”

His words echo those of Ruth Rae, a 48-year-old librarian from Northampton who explained in 1979 why she was willing to use vacation time from her job at Hampshire College in Amherst to serve a 20-day jail sentence for criminal trespassing. She was arrested in August 1976 for refusing to leave the nuclear power plant construction site in Seabrook, and was ordered to jail three years later after refusing to pay a $100 fine. 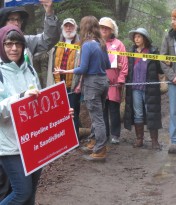 Rae told the Gazette at the time there is no doubt she was trespassing when she sat on the ground, singing and planting trees with 177 other protesters who were arrested. Rae explained that occupying the construction site was less harmful to society than the nuclear power plant that eventually would be constructed. “I don’t like the idea of going to jail, but when I decided (to occupy the site), it was a very deliberate decision. I was ready to pay the consequences.”

Though the Clamshell Alliance did not succeed in blocking construction of the Seabrook plant, only one of two planned reactors was built. The protests — along with the 1979 reactor meltdown at Three Mile Island in Pennsylvania — helped stoke the “No Nukes” movement that resulted in far fewer nuclear power plants than envisioned during the 1960s when advocates called for as many as 1,000 across the country. Eventually just 112 reactors were built.

Ironically, that has contributed to more power plants run by fossil fuels, including natural gas. Still, activists who occupied the Seabrook site 40 years ago, say they have no regrets. Robin Thompson, now 62, of Amherst, was held in 1977 for 11 days at the National Guard armory in Manchester, New Hampshire. She told the Boston Globe last month: “It does give me pause that carbon emissions are going up. But I still believe nuclear power is an absolute disaster waiting to happen.”

The legacy of today’s pipeline protesters is yet to be determined. They took credit for the decision last year to halt the Northeast Energy Direct project planned by Tennessee Gas Pipeline through western Massachusetts.

Though the Sugar Shack activists are unlikely to stop the pipeline expansion at Otis State Forest, their civil disobedience is a statement calling on other local leaders to take a similar stand “in the midst of all these government leaders who refuse to do their job and truly lead us out of this climate mess,” as Coler puts it. “Let our actions demonstrate true leadership and serve as an example to the ‘higher’ governing forces.”