No Fracked Gas in Mass May 25 Newsletter

Many affected by the Spectra / Enbridge expansion of their Algonquin pipeline system (Atlantic Bridge, Access Northeast and the AIM West Roxbury Lateral), have been following the reporting of Itai Vardi of DeSmogBlog. Revelations from his May 18th article, “Massachusetts Let Spectra Energy Secretly Edit its Pollution Permit in Atlantic Bridge Gas Project”, has stirred the already active opposition to Atlantic Bridge to take their complaints directly to the MA DEP.

On Monday, a group stormed the MA DEP offices, arriving unannounced to make  statements of grievances over the process and demanding a meeting with officials.

On Tuesday, they met with department officials to get their objections on record, along with a request for the air quality permit for the Weymouth Compressor Station to be revoked, and an independent review conducted.

And on Wednesday evening, they protested along Bridge Street, near the compressor site. With the fast pace of public push-back, information on upcoming protests and actions against Atlantic Bridge and it’s Weymouth compressor station is most reliably found on the Families Against Spectra/Enbridge (FAS/E) Facebook page or South Coast Neighbors United.
Next, a Community Meeting on Air Pollution is planned for Tuesday, May 30, 2017, in which Dr. Curt Nordgaard and others will be presenting information gained from independent testing of the future compressor station site, and citing conflicts with the data reported by both DEP and Spectra.
TUESDAY — MAY 30, 2017 — QUINCY, MA 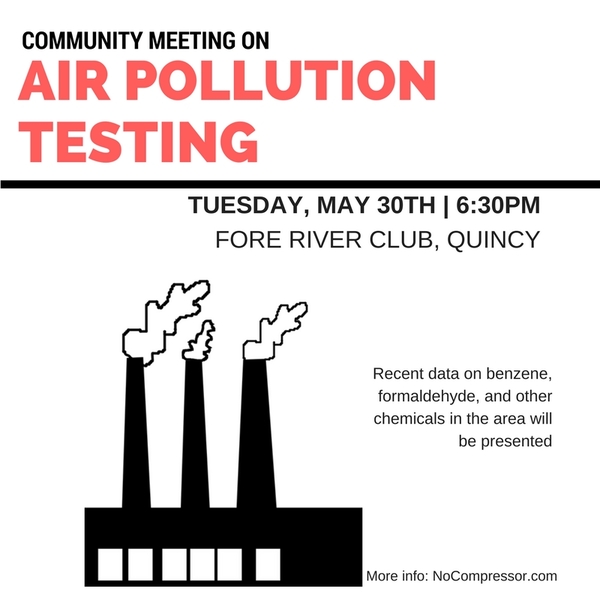 From NoCompressor.com:
Due to the lack of local testing by Massachusetts Department of Environmental Protection (MassDEP), we took it upon ourselves to measure the current levels of pollution, such as benzene and formaldehyde, in the Fore River Basin. We worked with a local testing laboratory to gather data in and around the the proposed compressor site. FRRACS and the North Weymouth Civic Association also purchased formaldehyde testing badges that were analyzed by a certified testing laboratory.The data that we have collected conflicts with both MassDEP’s and Spectra’s data. Dr. Curt Nordgaard, who has been leading the
testing for the past year, will be presenting the data.

At the meeting, we will explain the testing, how it relates to the station, and what the results mean. We have invited local elected officials, as well as representatives from MassDEP, in the hopes that they will engage in an open dialogue about our concerns related to public health in our communities.
6:30 PM
Fore River Clubhouse
16 Nevada Road
Quincy, MA
» RSVP for the Facebook event here

»» Keep up with the latest Atlantic Bridge News on NFGiM