PROJECT DESCRIPTION:
Tennessee Gas (TGP, a subsidiary of Kinder Morgan), as part of the Columbia Gas Reliability Plan, is proposing a project labeled “261 Upgrade”, named for Compressor Station #261 in Agawam. This proposal was intended to “provide reliability” to Holyoke and Columbia Gas (CMA) systems and to allow for new gas customers for Columbia Gas (CMA). It consists of several components – primarily the “Looping Project” and “Horsepower (HP) Replacement Project”. There is also a proposed new Meter Station planned for Longmeadow.  TGP has repeatedly argued that this is not a part of the same project, but the state has demanded that they add it to the Environmental Impact Report, and we keep insisting that leaving it out is segmentation.

UPDATES:
• As of March 25, the project has received its Certificate and Notice to Proceed, and TGP filed its notice of commencement of construction, which is now underway.

However, both customers for this project are out of consideration. Holyoke Gas & Electric withdrew when Mayor Alex Morse stated in April 2019 they would not expand gas service, citing climate considerations. Then in late February, Columbia Gas was banned from continuing to do business in the state as part of the settlement in the case of the Merrimack Valley disaster. Though Eversource will purchase Columbia Gas’ Massachusetts systems to keep up service, it is not clear that they intend to follow through with Columbia Gas’ Reliability Project, expanding service in the Pioneer Valley as they are in the Worcester area (with pipeline system expansions in Westborough and Ashland).

FURTHER PROJECT DESCRIPTION:
– The Looping Project included 2.1 miles of 12-inch-diameter loop to be installed on Tennessee’s existing 10″ 261B-100 pipeline. The majority of the loop would have been  located within Tennessee’s existing pipeline corridors and will replace an existing inactive 6-inch-diameter pipeline where feasible. This would have been included a new pigging launcher at the compressor station site and a new receiver at the end of the loop approx. 2 miles to the north.

– The HP Replacement Project involves removing two existing older units (a Solar Saturn installed in 1965 and a Solar Centaur installed in 1991) and installing a new Solar Taurus 70 unit. This would result in an overall increase of 4,418 horsepower to the station, and an increase of up to 7.8 decibels in noise level to nearby dwellings. There doesn’t appear to be data provided on the difference in emissions between the compressor engines being removed and the one being installed. This design will provide higher pressure into the 10-inch 261B-100 pipeline, and will increase the operational reliability to serve Holyoke Gas & Electric customer. 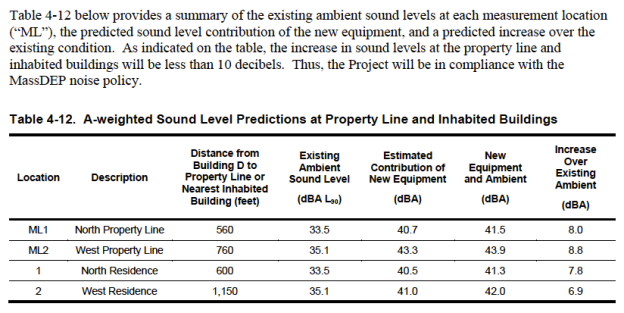 — Longmeadow Metering & Regulation (M&R) Station. Also tied to this project is a new Metering and Regulation (M&R) station along the TGP 200 line in Longmeadow. TGP has tried to claim that this is separate, but in the interest of not allowing segmentation, the MEPA process has required them to consider this project along with the 261 Upgrades when addressing their work with Columbia Gas and Holyoke Gas & Electric. TGP’s filing with FERC, filed AFTER Secretary of Energy and Environmental Affairs Matt Beaton’s insistence on inclusion of this M&R station for state permitting purposes, still insists that this station is a separate project, even though it serves the same end use project for the same customer – Columbia Gas’ Reliability Project. 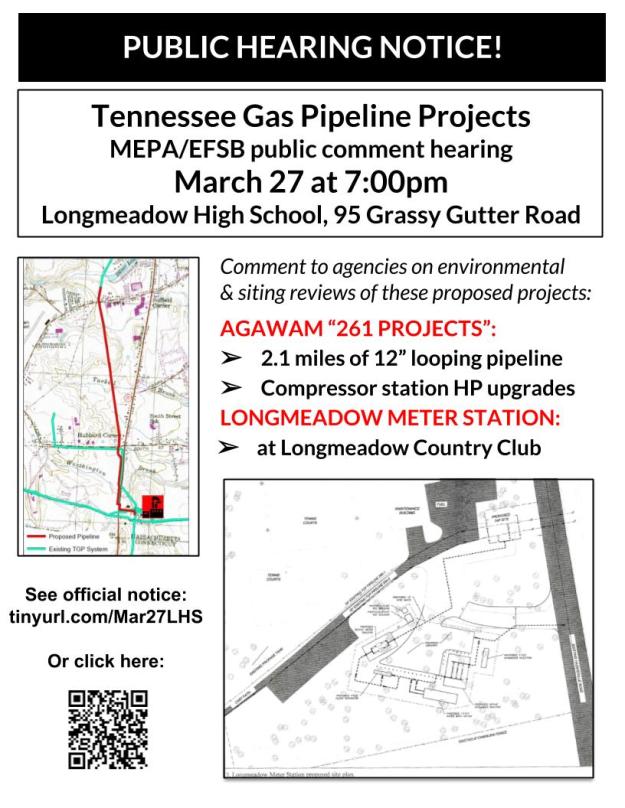 The Siting Board and MEPA also seek written comments concerning the proposed 261 Upgrade Projects and the Longmeadow Meter Station.

– EFSB – April 10, 2019
Comments for the Siting Board should be sent by email to both Stephen.August@mass.gov and dpu.efiling@mass.gov or by U.S. mail to: Energy Facilities Siting Board, One South Station, Boston, Massachusetts 02110, Attention: Stephen August, Presiding Officer. The comments should be sent to the Siting Board by Wednesday April 10, 2019. The Siting Board will use the comments it receives, whether oral or written, in drafting a comment letter on the 261 Upgrade Projects to submit to FERC. If you have any questions, please contact Stephen August at the email or physical address above.

» Equitable transition to renewable energy can create millions of jobs (Letter to the Editor)
By Letters to the Editor | The Republican and MassLive
July 16, 2019

» Massachusetts mayor says access to cheap gas not worth the cost to climate
By Sarah Shemkus, Energy News
July 8, 2019

» Longmeadow residents to vote on regulations for proposed gas pipeline construction project
By WWLP.com 22 News
May 13, 2019

» Longmeadow residents to vote on proposed Tennessee Gas pipeline on May 14
By Don Shipman, WWLP
May 07, 2019